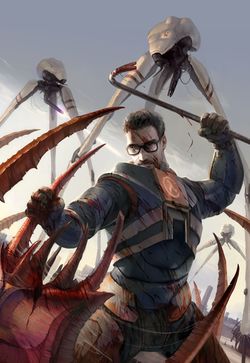 The featured articles of the wiki are articles that represent the best that the Combine OverWiki has to offer. They can be nominated by any user, but a quality article status can be given only by OverWiki staff members.

An article's status is indicated by the F, G, or S logos in the top right corner or an appropriate article management tag. Before reaching a quality article status, an article often goes through a cleanup process as part of our Cleanup Project. Any movement of an article up the quality status ladder that resulted from recent copyediting or addition of new content is listed in the Content Updates.

In order to be regarded as a featured article, an article should:

Featured articles are a collective effort of multiple editors and are promoted jointly by the OverWiki staff. If an article fulfills every requirement, it is promoted at the beginning of the next available month and showcased on the Main Page (see the queue).

When an article is too short but of quality nevertheless, it is called a good article. This includes articles that:

Articles should be given a good status only after a joint decision of at least two staff members.

When an article is clean but does not have much content, it is just considered a safe article. To be marked as such, it needs to provide basic coverage of its subject and be fully integrated into the OverWiki structures. This is also the target quality status for Quote articles.

Cleaned up articles to be reviewed

When an article has gone through a cleanup process and is likely to reach a quality status after a staff review, it is marked as a cleaned up article to be reviewed.

Articles for clean up

When there are issues with an article (such as bad formatting, structure problems, unsourced claims, poor English), but cleaning it up would involve copyediting, rather than major, vital additions, it is considered an article for clean up.

When an article is just a draft and lacks major, vital pieces of content, needs heavy maintenance work to be integrated into the wiki, or is still being worked on after having recently been created, it's simply marked as an article under construction.